I am a common man and have concerns about common people, may they be living in my country, under Super Power (USA), in Europe or cold world of Russia & China or in the Middle East or far-East. Common man is living in this world to work hard and pay for the comfort of the influential. Governments these days are spending more of the common man’s (tax-payer’s) money to ward off fear of danger to their self than on welfare of common man from whom the money was extracted. Common man elects them to elevated positions and thereby cause to kill common man on the globe. Common man fails to understand that the ongoing killing of it’s lot is ‘War on Terror’ or ‘War of Terror’ as people are killed somewhere by suicide bomb and elsewhere by government forces’ fired missiles while they are busy in marriage ceremony, religious congregation, shopping in the market, traveling to visit friends or witnessing a movie or drama. Victims in all the cases are innocent people who are killed without having caused any provocation. The most confusing thing is that so far no one has sincerely tried to define what is terrorism and who, in fact, is a terrorist because two different persons doing the same act of killing, one is named terrorist and the other is said to have been under understandable emotions.

I was surfing web for some engineering project that I hit a page which made me hold my breath. Below is an extract from a report prepared by National Priorities Project at the end of year 2011

Introduction
Since the U.S. invasion of Iraq in March 2003, National Priorities Project has tracked the costs of the wars in Iraq and Afghanistan.

Recent events, including the end of U.S. combat operations in Iraq in December 2011 and the winding down of the troop “surge” in Afghanistan, have led to the question – what’s going to happen to funding for U.S. operations in these countries?

The answer is in three parts:
Annual funding will be lower than in the past.
1. The wars will continue to draw on taxpayer resources even after combat operations in both countries have ended.
2. The funding stream will increasingly flow through federal agencies other than the Department of Defense, primarily the State Department and the U.S. Agency for International Development.
3. NPP will continue to analyze funding for Iraq and Afghanistan – and the counters will keep 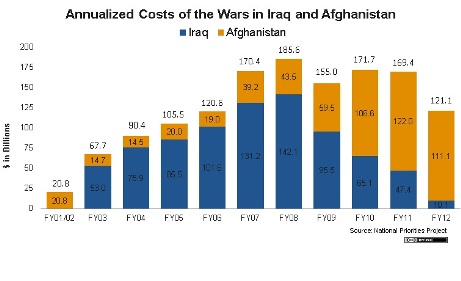 rolling – for as long as U.S. taxpayers are asked to support the direct and indirect costs of these wars.

War Costs To Date
[Note: These totals are based on appropriations that provide funding through the end of the current fiscal year on September 30, 2012.]

Total War Funding: $1.38 trillion has been allocated to date to fund the wars in Iraq and Afghanistan, including $121.1 billion in fiscal year 2012.