My Ring Finger is fairly longer than my Index Finger and only a bit shorter than my Middle Finger.

A year back, I read some where that men with Ring Finger longer than their Index Finger are very attractive for girls / women. How much that is true is my secret which I don’t want to reveal. Now I have seen the following:
Regarding the last line of the text imaged below, though I worked hard and with sincerity, I never earned money more than the bear needs of my family.

According to a new batch of studies, the secret to your personality traits lies in your hands. Yes, your hands. More specifically, the length of your ring finger.

Apparently, according to science, the ring finger shows how much testosterone you were exposed to while you were growing in the womb, which I guess can have an effect on your personality. 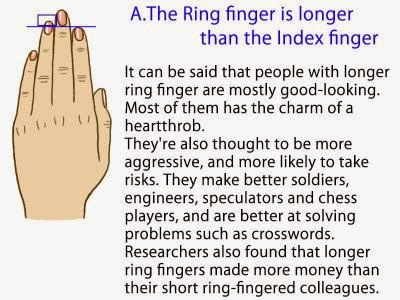